I’m afraid I have heartbreaking news today. On Tuesday night I left the back door open and apparently Inkblot slipped out during the night. He never returned.

We’ve scoured the neighborhood, put up flyers, and checked with the local shelter, but there’s no sign of him. It’s inexplicable. It’s not the first time I’ve failed to close all the doors at night, and never in his life has he ever strayed more than a couple hundred feet from home. I don’t know what happened this time. I just can’t figure it out.

I kept hoping he’d come trotting through the door any moment, sporting his usual quizzical expression, wondering what I was so worried about and asking when dinner was going to be served. Then he’d go back to stealing my chair out from under me and demanding to be held upside-down so he could suck on my armpit. I kept hoping I wouldn’t have to write this post. But he hasn’t come back, and if he were anywhere nearby he’d have returned long ago. We haven’t given up hope entirely, but at this point I’m afraid we’ve lost him for good. As you can imagine, it’s been a very sad week around here. He was the best of cats.

I have two pictures today. The top one is the first picture I took of Inkblot after we brought him home from the shelter on July 10, 1999. He was about two months old at the time. The second one is from Sunday. It’s the last picture I ever took of him. He was 13. 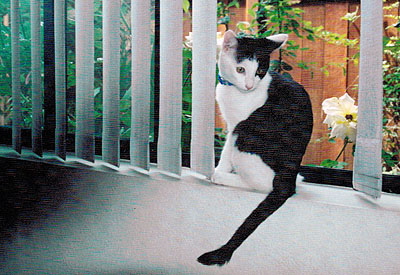 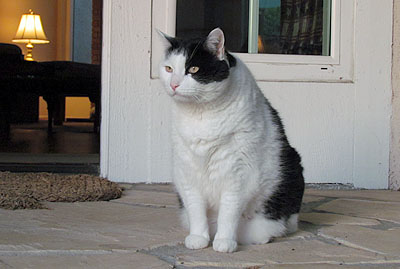