Every year, it seems like the economy goes into spring training on a promising note, only to quickly dip into the kind of June swoon normally associated with the Dodgers. That is, it seems like this if, by “every year,” you mean the past three years. What’s up?

One possibility is that something about the nature of the recession has played havoc with the seasonal adjustments made to economic data. Normally, summer means lots of temporary summer jobs, so the various economic agencies take that 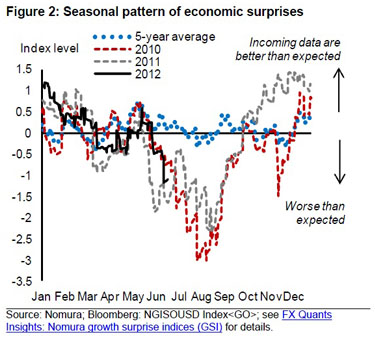 into account. They don’t report that the economy added a million jobs in June because they know that’s merely an artifact of the time of year. Instead they subtract those jobs from the total in an effort to provide a better indication of how the underlying economy is really doing.

Usually this works fine. But Cardiff Garcia passes along this chart from Nomura suggesting that something about the Great Recession has thrown things out of kilter. The summer months are regularly looking gloomier than expected and the winter months slightly better. Garcia suggests that this might mean the economy isn’t bouncing around quite as much as it seems:

Our guess — and please, we emphasise that it’s just a guess — is that that the underlying pace of jobs growth is somewhere between this month’s print of 80,000 and the six-month average of monthly job gains (150,000). We base this both on the seasonality issues and on the fact that certain other employment reports (initial jobless claims, the ADP private employment report, Challenger layoffs) indicate a slightly better situation.

To be sure, 80k-150k is a wide range, but our main point is that yet again, things probably aren’t quite as bad as the employment reports of second quarter would suggest, just as the economy wasn’t growing as quickly as the readings from the first quarter suggested.

This is all super wonky stuff, and probably doesn’t really affect the big picture much. The economy is sputtering along in so-so shape, and corrections of this magnitude don’t change that. However, if seasonal adjustments really have departed from their historical values, it gives new meaning to the usual advice not to read too much into a single month’s numbers. Maybe the new advice should be not to read too much into even a single season’s numbers.