David Brooks has returned from Aspen, where he heard a presentation from Harvard political scientist Robert Putnam. According to Putnam, there’s a growing gap in the way the rich and poor raise their kids:

Over the last 40 years upper-income parents have increased the amount they spend on their kids’ enrichment activities, like tutoring and extra curriculars, by $5,300 a year….In 1972, kids from the bottom quartile of earners participated in roughly the same number of activities as kids from the top quartile. Today, it’s a chasm. Richer kids are roughly twice as likely to play after-school sports. They are more than twice as likely to be the captains of their sports teams. They are much more likely to do nonsporting activities, like theater, yearbook and scouting. They are much more likely to attend religious services.

It’s not 100% clear from Brooks’s column, but it sounds as if the problem here isn’t that working class families are doing any less than before. The growing gap is caused by the fact that affluent families are doing much, much more. This is similar to the trend of growing income inequality in America: the problem isn’t that the working class is making less money than they used to, the problem is that their incomes have been sluggish while incomes of the well-to-do have skyrocketed.

This makes me skeptical of Brooks’s favored explanation for the parenting gap: the growing number of single parents in America. This is, he says, primarily a working/middle class phenomenon, and single parents simply don’t have the time or money to raise their kids properly. I’m willing to buy the idea that growing 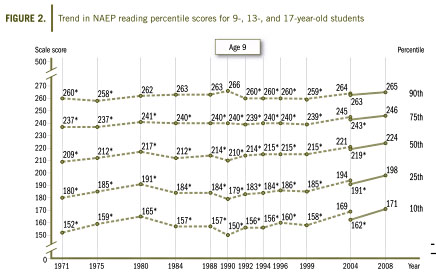 single parenthood is a problem, but still, if that were really the cause of the gap then I’d expect to see kids in poorer families doing worse on an absolute scale. But I don’t know of any evidence on that score, and Brooks doesn’t provide any. In fact, the one piece of evidence he mentions is school test scores, and he very cagily writes of poorer kids only that “Their test scores are lagging.” Technically, that’s true: poorer kids have always done worse than affluent kids, and they continue to do worse today. But that doesn’t mean their test scores have gone down. On the contrary: whether you measure by income level (kids who qualify for free lunches) or by performance level (the bottom decile of test scores), poor kids have improved their scores over the past four decades. That’s true for white kids, black kids, and Hispanic kids. It’s true for boys and girls. It’s true for public school kids and private school kids. On the NAEP test, the supposed “gold standard” of national testing, children of all kinds have improved or, at worst, stayed steady, on every possible metric since the early 70s.

What else can you say about poor and working class neighborhoods over the past 40 years? Well, crime is way down. Drug use is down. Those are positive social indicators. So I’m a little puzzled when Putnam says of working class kids that “virtually all our major social institutions have failed them — family, friends, church, school and community.” I won’t pretend that our major social institutions are doing a great job with poorer children, but I don’t quite see the cataclysmic failure that he does. What I do see is growing income inequality that allows affluent parents to do far, far more for their kids than they could even a few decades ago. That may be a problem, but it’s a very different kind of problem than the one Brooks usually talks about. 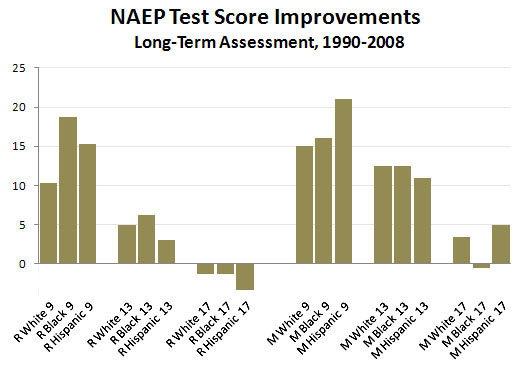