Andrew Sprung draws my attention to a Kaiser quiz about Obamacare from a few months ago, and you’ll be unsurprised to learn that most Americans don’t know much about it. I put the responses into graphical form, and what’s most interesting, I think, is to look at the right side of the chart: the questions that were most frequently gotten wrong.

All of them are tied together by a single thread: they’ve been the main targets of the conservative misinformation campaign against the Affordable Care Act. The tea party folks have never spent much time talking about low-income subsidies or tax credits or 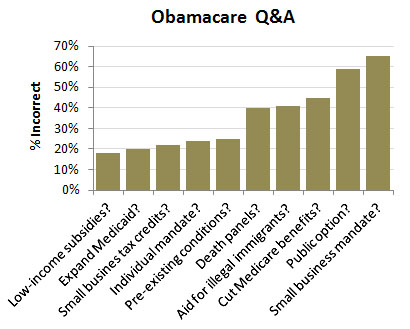 Medicaid expansion or pre-existing conditions. And guess what? Most people know how the law works in those areas.1

But conservatives do spend a lot of time rabble-rousing about death panels and illegal immigrants and Medicare cuts. And they also spend a lot of time bewailing the “government takeover” of healthcare, which includes things like the public option (“a new government run insurance plan”) and a supposed mandate that small businesses will all be required to offer health insurance for their employees. Sure enough, those are the areas where misunderstanding is highest.

That’s why I disagree with Andrew that misinformation about small businesses amounts to a “foot fault” by current standards of public discourse. In a way, he’s right, of course: it’s not a major flash point and it hasn’t gotten a lot of news coverage. But there’s a reason it’s the single most misunderstood issue. The Rush/Fox/Drudge axis has been screaming about the government takeover of healthcare for three years now, and it’s sunk in. Most people believe it. That’s why, faced with a question most of them really have no idea about, their immediate reaction is to believe that, in fact, government is once again planting its jackboot directly on the necks of America’s small businesses. It’s a small issue, but it’s also a bellwether that the broader conservative misinformation campaign has burrowed very deeply into the American psyche.

1The exception, of course, is the individual mandate, which gets a lot of tea party attention but scores well anyway. That’s because there really is an individual mandate in the law, so conservatives have no need to lie about it.