Zeke Miller provides us with the meme of the day:

“Where we are seeing weaknesses in our economy, had to do with state and local government, often times cuts initiated by governors or mayors who are not getting the kind of help that they have in the past from the federal Government, and who don’t have the same flexibility as the federal government in dealing with fewer revenues coming in,” Obama continued, calling on Congressional Republicans to take steps to help local and state governments create jobs.

Needless to say, Republicans have pounced on Obama’s suggestion that the private sector is “doing fine.” Here’s the Romney campaign:

There’s no question that Obama left himself wide open to this attack. It’s an unusual gaffe from someone who’s usually more careful with his words. Still, whether Republicans like it or not, Obama is more right than wrong. The private sector may not be “doing fine,” but it’s doing OK. Meanwhile, the public sector continues to struggle badly, shedding jobs and cutting back on spending, and this has been a big contributor to our anemic recovery. Paul Krugman has the charts on spending here, and I’ve got the chart on employment below. As you can see, the private sector has indeed rebounded from the depths of the recession and is now adding two million jobs per year. That’s not great, but it’s not terrible. The public sector, conversely, started cutting jobs even before the stimulus money ran out and is now shedding about 200 thousand jobs per year. That may be good for conservative small-government ideology, but it’s a significant drag on an already fragile economy. 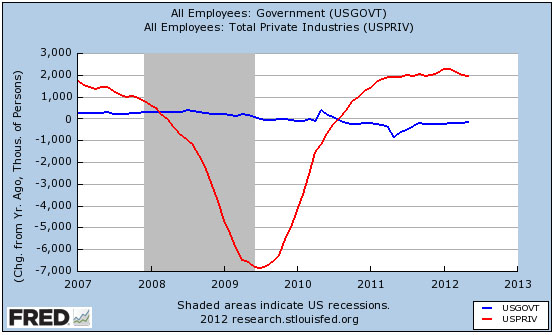