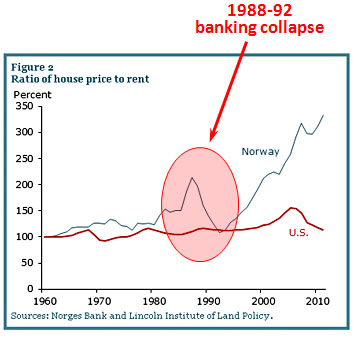 Matt Yglesias points out today that Norway is in the middle of a gigantic housing bubble, and as I recall, Denmark is too. (I’m not sure about Sweden.) You can say all the usual things about this, but what’s most interesting from the “this time is different” perspective is that Norway has already had a gigantic housing bubble. Not the one a century ago in 1890, but the one a mere 20 years ago that led to a banking crisis starting in 1988. It’s the red oval in the chart on the right, and even though it looks like a blip compared to the current bubble, it was anything but. It led to the collapse of Norway’s banking sector, an all but total collapse of the housing market in Oslo, a taxpayer-led bailout, and Norway’s exit from the ECU (the precursor to the euro).

But despite this near-death experience, within a mere two decades Norway is in the midst of a housing bubble that makes the last one look like a pipsqueak. The good news is that they’re no longer in a fixed-rate exchange area, which gives them more flexibility, but it’s still a bubble, and even with a krone that floats it’s a pretty dangerous place to be. We really never learn, do we?

Interested in more? The definitive report on the 1988-92 crisis is here, and it’s recommended reading for anyone who wants to understand banking collapses and how they can be dealt with. Also, read this John Hempton post from 2008, which explains what happened and suggests that Spain might be next. The new report from which the chart above is taken is from the San Francisco Fed.