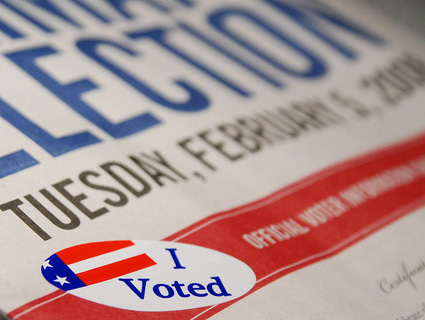 Via Ed Kilgore, we learn today that voter suppression is alive and well in Iowa. On his first day in office after winning the 2010 election, Gov. Terry Branstad reinstituted a long and laborious process that prevents most released felons from voting:

Henry Straight, who wants to serve on the town council in the tiny western Iowa community of Arthur, is among those whose paperwork wasn’t complete. Straight can’t vote or hold office because as a teenager in Wisconsin in the 1980s, he was convicted of stealing a pop machine and fleeing while on bond.

Straight spent a year on the effort and hired a lawyer for $500 to help. Yet he was notified by the governor’s office last month that he hadn’t submitted a full credit report, only a summary, or documentation showing he had paid off decades-old court costs. They make the process just about impossible,” said Straight, 40, a truck driver. “I hired a lawyer to navigate it for me and I still got rejected. Isn’t that amazing?”

Iowa’s process also includes a 31-question application that asks for information such as the address of the judge who handled the conviction. Felons also must supply a criminal history report, which takes weeks and costs $15. Then the review can take up to six months.

Felons, of course, tend to be poorer, blacker, and younger than the general population, which means they’re more likely to vote for Democrats than the general population. So who cares if they’ve paid their debt to society? A tendency to vote for Democrats is mighty suspicious behavior all on its own, no? Surely anyone foolish enough to belong to one or more of these demographic groups should expect to have a hard time voting whenever a Republican machine is in charge.

Ed adds this: “A credit report to regain the right to vote? That’s about the most revealing reflection of latter-day Republican values I’ve seen in a while….There’s not a question in my mind that these people would reinstitute poll taxes if the courts and Grover Norquist would let them.”