The chart below comes from ProPublica reporters Justin Elliott, Cora Currier and Lena Groeger. (Click here for a larger, interactive version.) It shows the various claims about civilian drone deaths from administration sources over the years, varying from “a handful” in 2011 to 50 or 60 over the course of seven years. As Elliot shows in an accompanying piece, these claims haven’t been consistent over time.

To be honest, my initial reaction to this is that I’m surprised at how consistent the claims have been, not how inconsistent. A few of them clearly don’t add up, but with only a couple of exceptions they’ve pretty uniformly told reporters that there have been about 30 civilian deaths over the past two or three years and perhaps 50 or 60 over the life of the program.

But consistency is probably the least of the issues here. As the New York Times reported a couple of weeks ago, the Obama administration “counts all military-age males in a strike zone as combatants […] unless there is explicit intelligence posthumously proving them innocent.” Given that methodology, it’s a miracle that the administration has fessed up to any civilian deaths. If there’s a lesson from this, I’d say it’s not that officials sometimes give differing estimates of civilian deaths. I’d say it’s the fact that, in truth, they probably don’t have the slightest idea how many civilian deaths they’ve caused. 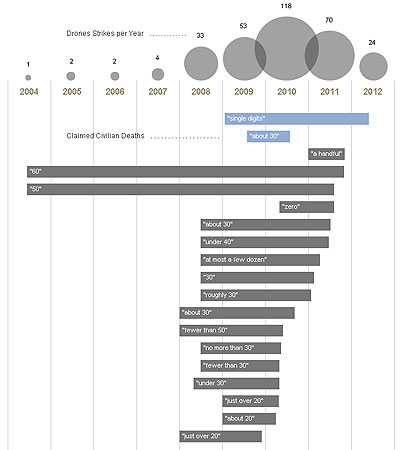