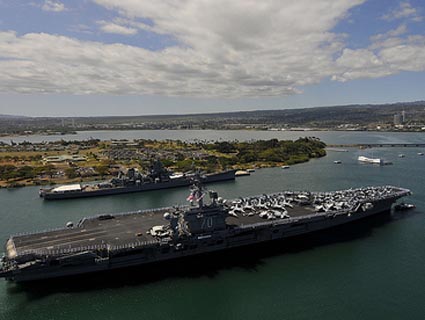 Last year the Obama administration secretly imprisoned Ahmed Abdulkadir Warsame, an alleged member of the Somali militant group Al Shabab, on an aircraft carrier and interrogated him for two months before bringing him to the US and indicting him. No one was very happy about that decision. It made Republicans in Congress mad because they want Obama to add more prisoners to Gitmo and keep Muslims accused of terrorism out of civilian courts, and it frustrated civil libertarians and human rights groups who argued the administration had detained Warsame illegally.

Republicans, worried that Obama might prosecute more suspected terrorists in civilian court, crafted the latest defense authorization bill to ensure they’re notified within five days the next time someone is detained on a Navy ship for months. The administration has threatened to veto the defense bill over that provision, saying it would “unnecessarily complicate and potentially compromise military operations and detention practices.”

This is basically where civil liberties are in the Obama era: legislators are only interested in forcing detention policy to the right, and occasionally the Obama administration’s desire to avoid restrictions on executive power results in more favorable (but far from ideal) outcomes for people accused of terrorism. Obama’s veto threats are notoriously insincere, and preventing the administration from using the “Gitmo at Sea” option seems likely to result in more legally questionable proxy detentions of American citizens by foreign security forces with reputations for abusing those they detain.

It’s not much of a choice, and it probably won’t get any better if the White House changes hands in November. Republicans will lose their newfound interest in keeping an eye on whatever the executive branch is doing, and the Democrats will have largely squandered whatever credibility they have to oversee a Republican president by acquiescing to the Obama administration’s continuity with much of the Bush platform on national security.