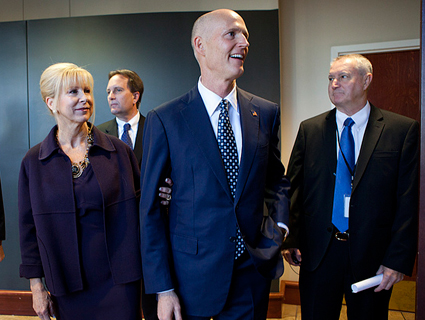 With the White House potentially at stake—not to mention control of Congress—Florida Gov. Rick Scott (R) is taking some extra precautions ahead of the November election. Scott has set about updating Florida’s voter rolls to purge names of people who aren’t eligible to vote in state elections. Sounds like a plan. Except, as Think Progress’ Judd Legum tells us, it’s actually kind of a disaster:

Late last year, Governor Scott ordered his Secretary of State, Kurt Browning, to “to identify and remove non-U.S. citizens from the voter rolls.” But Browning did not have access to reliable citizenship data. The state attempted to identify non-U.S. citizens by comparing the voting file with data from the state motor vehicle administration, but the motor vehicle data does not contain updated citizenship information. The process, which created a list of 182,000 people, was considered so flawed by Browning that he refused to release the data to county election officials. Browning resigned in February and Scott has pressed forward with the purge, starting with about 2600 voters.

Much of the discussion of Mitt Romney’s failings with Latino voters centers on his purported plan to win them over. Maybe he can woo Hispanic voters by talking about jobs and education. Maybe he can soften up on immigration. Maybe he can select Florida Sen. Marco Rubio as his running mate. Maybe he can play up his Mexican roots! But really, it’s looking more and more likely that his best plan for dealing with the Hispanic gap is to just let Republican governors make it harder for Hispanics to vote, either through strict voter ID laws, or by purges. As Legum notes, “Hispanics comprise 58 percent of the list but just 13 percent of eligible voters.”

Tim Murphy is filling in while Kevin is on vacation.