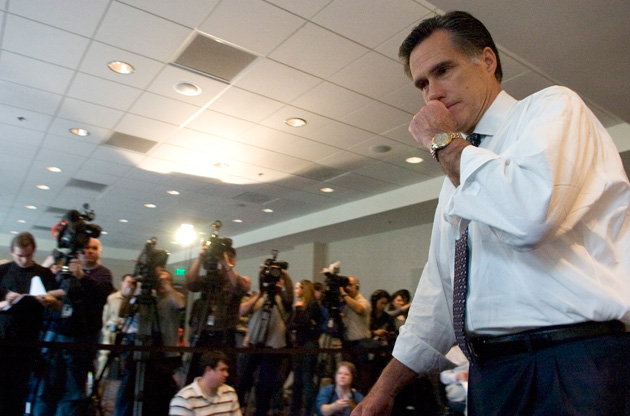 As one who has long found the breathless election coverage of candidates’ personal lives to be puerile and voyeuristic, I’d usually be sympathetic to complaints about the “vetting” of Mitt Romney in the media this election cycle. I can’t imagine why anyone would want to run for office and put up with it, but then that’s why they’re them and I’m me.

Nonetheless, this lightning rod of an article from Politico on Thursday about unfair coverage of Romney is a bit much. Particularly this part of it:

Ari Fleischer, the former press secretary to President George W. Bush, said the personal coverage of Romney is silly and won’t cut it with voters, but that he finds the media inconsistency with regards to covering Obama to be galling.

“These stories are not unusual, except they were never done about then-Senator Obama in 2008,” Fleischer said. “The press never ran probing, sneering stories about candidate Obama, and yet The Washington Post and New York Times are on overtime covering who-cares stories about Mitt Romney.”

Please spare us the pearl-clutching, Ari. I don’t recall hearing any complaints from the former Bush press secretary about the coverage of Al Gore’s alleged “Eloise” childhood hotel home (a completely bogus story to boot) and the rest of the disgraceful GOP-fed coverage of that campaign. And Fleischer certainly didn’t step up to complain about the front page stories about John Kerry’s so-called butler or or his “elite” windsurfing habits. Certainly Kerry’s richy-rich wife was spared no mercy.

And it’s not true that Obama was “unvetted” (which is a favorite meme lately among the denizens of the right-wing fever swamps—one that ties directly into birtherism, by the way). There were front-page stories about his million-dollar house and his upbringing and his associations with various nefarious characters in Chicago. I don’t think anyone can say the media didn’t delve into Obama’s religious life. It’s true that few journalists rushed to Honolulu to examine the kerning on his birth certificate, because there was no reason to. He is, after all, an American.

The difference between the stories about Kerry’s and Romney’s wealth and Obama’s is quite simple: the Obamas weren’t wealthy by comparison. (Poor Al Gore was the one who was treated most shabbily, with a GOP-concocted tale of childhood wealth that wasn’t true.) And in this campaign, at this time of economic stress, the fact that Romney is extremely wealthy—and from a form of capitalism that is under extreme scrutiny—is a very relevant story. More relevant than usual, I’d say.

The Republicans are playing the refs and they are good at it. (And Politico sure seems to love a polarizing media story, all the more if it implicates its rivals.) But this is one time when a close look at a candidate’s wealthy lifestyle and how he acquired it is important. We’re in a new gilded age suffering from the aftermath of a Wall Street meltdown perpetrated by wealthy gamblers and vulture capitalists like Mitt Romney. It would be journalistic malpractice not to examine that. If the GOP doesn’t want the American people to know that they are in the grips of the wealthy financial elite, perhaps they shouldn’t have nominated one of their poster boys as their candidate.