A couple of days ago Gallup surveyed the U.S. citizenry about President Obama’s decision to come out in favor of same-sex marriage. In their poll, a larger number said it would make them less likely to vote for Obama than more likely.

Robert Wright is skeptical, largely because he doesn’t believe that 52% of Republicans are truly less likely to vote for Obama now. “Do you really think that 52 percent of Republicans had a 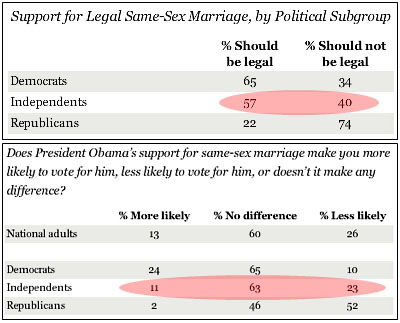 Fair point! But I’m skeptical — or maybe puzzled is a better word — for a different reason. Take a look at the two Gallup polls on the right and zero in solely on independents. Independents, by a pretty wide margin, think same-sex marriage should be legal. And yet, independents, again by a fairly wide margin, say they’re less likely to vote for Obama because he now thinks same-sex marriage should be legal.

This isn’t an impossible result. If the anti-marriage forces feel much more strongly than the pro-marriage forces, you could get this result. But their intensity would have to be a lot higher. If you take these numbers seriously, 57% of the antis are unhappy enough to be less likely to vote for Obama while only 19% of the pros are happy enough to be more likely to vote for him.

Again, not impossible. Maybe there really is an intensity gap that big. Or maybe most of the pros never believed in Obama’s “evolution” in the first place while lots of the antis did. Who knows? But it’s an odd result.