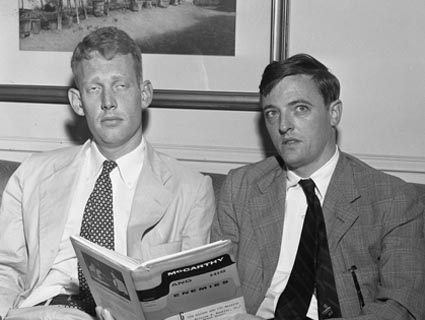 Jonathan Chait, Jonathan Bernstein and myself have all weighed in on Kevin D. Williamson’s rather ahistorical take on conservatives being the real heroes of the civil rights movement in National Review.

Among Williamson’s odd omissions was not mentioning the misty eyed defense of white supremacy National Review founder William F. Buckley penned in 1957. (He also ignores Buckley’s view that the Civil Rights Act was “artificially deduced from the Commerce Clause of the Constitution or from the 14th Amendment.”) That many liberal Republicans supported civil rights, and many racist Democrats didn’t, doesn’t alter the fact that the modern conservative movement really begins with a man who campaigned on opposition to the Civil Rights Act of 1964.

Williamson hasn’t responded to any of his critics at National Review, but he did offer this up on Twitter:

“WFB’s views have been endlessly documented. I have nothing to add.”

Williamson has “nothing to add” to the historical evidence that debunks his argument. I supposed I wouldn’t have “anything to add” either, but I’m wondering how that conversation went with National Review‘s editors.

NR Editor: Do you think maybe in this piece about conservatives being awesome at the time we should acknowledge what was actually written in this magazine in the 1950s and 60s?

Williamson: Well what do we have to add?

Williamson did offer a valiant Chewbacca defense of his piece as well:

Chait: “Why not get behind the next civil rights idea (gay marriage) now?” How about an all-African-American national referendum on that?

Man, listen: The expiration date on that “joke” is rapidly approaching.