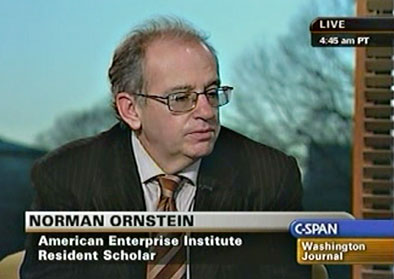 written a book blaming Republicans for our nation’s political ills:

I ran this thesis by Ornstein himself, and he confirmed that the book’s publicity people had tried to get the authors booked on the Sunday shows, with no success.

“Not a single one of the Sunday shows has indicated an interest, and I do find it curious,” Ornstein told me, adding that the Op ed had well over 200,000 Facebook recommends and has been viral for weeks. “This is a level of attention for a book that we haven’t received before. You would think it would attract some attention from the Sunday shows.”

Ornstein also noted another interesting point. Their thesis takes on the media for falling into a false equivalence mindset and maintaining the pretense that both sides are equally to blame. Yet despite the frequent self-obsession of the media, even that angle has failed to generate any interest. What’s more, some reporters have privately indicated their frustration with their editorial overlords’ apparent deafness to this idea.

Go figure. At the very least, you’d think they’d invite Ornstein and just book him opposite some Republican who could take the other side of the argument. So why haven’t they? Maybe they couldn’t find any Republicans willing to do it. It’s sort of a no-win proposition, after all. And without a he-said to balance Ornstein’s she-said, I guess he’s too hot to handle.