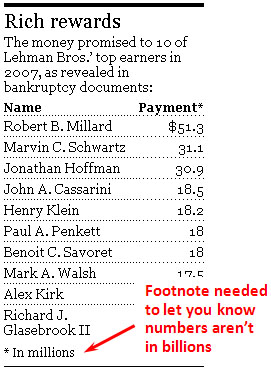 Here’s some heartwarming news from the LA Times today:

Less than a year before the 2008 collapse of Lehman Bros. plunged the global economy into a terrifying free fall, the Wall Street firm awarded nearly $700 million to 50 of its highest-paid employees, according to internal documents reviewed by The Times.

…. The rich pay packages for so many people raised eyebrows even among compensation experts and provided fresh evidence of the money-driven Wall Street culture that was blamed for triggering the financial crisis. “Many people are going to be stunned at how well some people were being paid,” said Brian Foley, an executive compensation expert in White Plains, N.Y. “This wasn’t a matter of five or six people being paid a lot.”

….The records illustrate that enormous pay wasn’t limited to top executives but was dished out to a wide range of traders and others who sometimes took home even bigger paychecks than the CEOs who ran their companies.

It’s nothing to get upset about, though. Just a few bad apples. The exception that proves the rule. The black sheep of the family. Surely you don’t believe that all of Wall Street was doing this, do you?