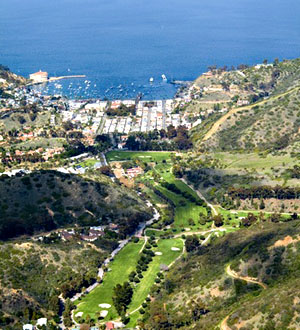 There’s no political spin to this story at all, but I’m putting it up anyway just for its entertainment value:

The tiny jail on Catalina Island is hardly Alcatraz. Just ask Frank Carrillo. The pro golfer turned jewel thief couldn’t believe his luck when he was moved out of his bleak Men’s Central Jail cell in downtown L.A. and allowed to do his time on the sunny tourist isle.

But things got even cushier when he met a Los Angeles County sheriff’s captain interested in shaving a few strokes off his golf game. Carrillo said Capt. Jeff Donahue escorted him in a patrol Jeep to a hilltop golf course last summer. There, dressed in his yellow inmate jumpsuit, Carrillo said, he gave the captain pointers on how to improve his swing and reduce a double-digit handicap.

….Carrillo, who compared his time in jail for multiple felonies to “hitting the lotto,” thought Donahue should be emulated, not investigated. “He was amazing to me,” said Carrillo, who believes the captain benefited from his lesson.

“He kind of has this swing that’s old school and risky, but he hits it every time,” Carrillo said in a phone interview. “I would probably say he’s a 14 or 15 handicap. Not too bad.”

No need to say more. You had me at “pro golfer turned jewel thief.” I smell quirky buddy movie here — maybe with Owen Wilson as the roguish golfer/jewel thief and Morgan Freeman as the gruff but likeable sheriff. Let’s do lunch.