The LA Times reports today that gasoline prices have hit nearly $4 lately but consumers aren’t really getting all that exercised about it. They suggest several reasons for this: the increase hasn’t been as steep as it was in 2008; prices 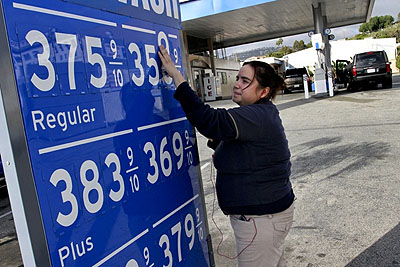 aren’t all that high when you adjust for inflation; and people have more fuel-efficient cars these days, so they’re using less gas. Also this:

“I think we all have adjusted,” said Lara Clayton of Los Alamitos as she spent nearly $60 recently to fill up her 2008 Lincoln Town Car at a Seal Beach 76 station. “We just don’t drive as much and we are careful to combine errands.”….Having already seen prices cross the $4 barrier, motorists are less likely to become outraged when they see it happen again, said Michael Sivak, who heads the University of Michigan’s Transportation Research Institute.

This rings true to me because it’s similar to an observation from economist James Hamilton, your go-to guy for all questions about the effect of oil prices on the economy:

Rising oil prices on their own don’t cause huge amounts of economic distress. It’s only when they break through a previous high and keep on going that we get a substantial reaction. This suggests that there’s a fair amount of psychology going on here, not just a pure macroeconomic response to the higher cost of energy inputs.

So what does this tell us? I think that Hamilton is talking about inflation-adjusted highs here, and our previous high (all grades/all formulations) was $4.16 in July 2008. That’s equivalent to a price of $4.35 today. Right now we’re at $3.99. This suggests (maybe!) that consumer reaction will continue to be “meh” unless the price of gas hits $4.35 and keeps right on going. Until then, it’s just another routine headache.