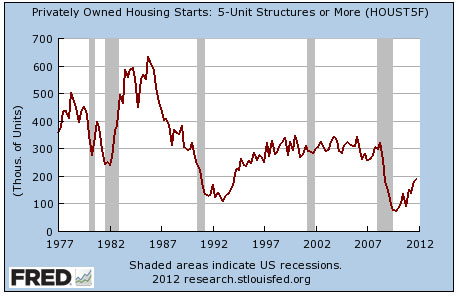 As you may recall, Smithian economics suggests that we’re due for a big rebound in housing construction and that this rebound will drive a strong economic recovery over the next few years. However, Karl Smith himself is starting to get pessimistic. Multi-unit housing starts are increasing, but they still look pretty anemic compared to past housing booms:

The “hopeful” argument is that while the absolute increase is much smaller this time around the pace is actually a bit faster, a four-fold increase rather than a 3-fold increase.

However, given the current conditions in housing I was looking for an even stronger snap back. This alone will not be enough to push the economy into a boom. We need a series step-up in the rate of growth.

What’s worse from a long run perspective is that the failure of multifamily to bounce back potentially sets up single family for a new bubble….That kind of instability is difficult to manage. Economic stabilization going forward would be better if there was a larger stock of multifamily rental housing, yet that is looking increasingly unlikely.

This might just be a temporary problem. Price-to-rent ratios are continuing to decline after a brief upward blip in 2009, which should make apartment construction increasingly attractive to developers. In the end, though, it’s all going to depend on the same virtuous circle that ends every recession: more jobs means more income, which means more homebuilding, which in turn produces more jobs, world without end. (For a few years, anyway.) But we’re still not producing enough new jobs to get all those 20-somethings to move out of their parents’ basements in big enough numbers, so the virtuous circle is having trouble really catching fire. More stimulus, please.