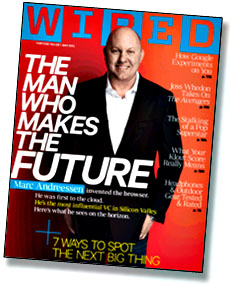 Felix Salmon pushes back against the canonization of Marc Andreessen in the current issue of Wired:

When you look at Marc the capitalist, rather than at Marc the ideas guy, the hero-worship becomes a bit more difficult….A lot of my own Wired story, last month, can be read as a push back against the IPO culture which Andreessen, almost more than anybody else, has managed to create.

“Silicon Valley is full of venture capitalists who have become dynastically wealthy off the backs of companies that no longer exist,” I wrote in that piece, and Andreessen is Exhibit A if you want to look for such a person. His first company, Netscape, lost the Browser Wars and ended up getting sold to AOL. His second company, Loudcloud, was (to be charitable) too far ahead of its time, so it “pivoted” into something called Opsware; eventually Andreessen managed to sell it off to HP. His third company, Ning, was even less successful, and ended up buried somewhere in Glam Media. None of them exist today in any recognizable form; none of them ever made much money; and none of them even really made it as far as building anything approaching a permanent income stream.

….While Andreessen is very good at making money, then, he’s much less good at creating lasting value for the long-term shareholders of his companies. In his world, buy-and-hold public shareholders are the patsies, the people left holding the bag when the fast money has long since departed. He’s smart; the rest of us are chumps. I guess it makes perfect sense that he’s recruited Larry Summers as a Special Advisor.

During the 90s I worked for a software company that, although modestly successful, never seemed all that successful compared to the dotcom frenzy that surrounded everything we did. Still, I always liked to joke that at least we made more money than Netscape. Which is to say, we made money.

I’ve got nothing against Andreessen. He’s obviously a pretty brilliant guy who saw the potential of the web before most of us. But Wired also gives him credit for cloud computing, which is kind of silly, and for social networking, which is even sillier. And the idea that somehow Andreessen deserves credit for pioneering the idea that software is going to become hyperintelligent in the near future? Crikey. Is there anyone in the past decade who hasn’t predicted that at one time or another?

And even the idea of web browsers as replacements for operating systems, which Andreessen can certainly take a lot of credit for, is happening largely because browsers are becoming nearly as big and complex and buggy as the operating systems they’re supplanting. All those thin clients we used to talk about are putting on weight. What’s more, yet another buzzy new name doesn’t change the fact that cloud computing has the same pros and cons that similar technologies have always had, ever since IBM first offered its customers centralized hosting services about a million years ago. As bandwidth and computing power grows, more stuff can be successfully hosted remotely, and from an IT viewpoint this offers huge advantages in terms of control over your user base. For the same reason, of course, the user base often hates it because it takes away their control. If you don’t feel like upgrading Microsoft Word whenever Redmond pumps out a new version, you don’t have to. But Google Docs? You upgrade when Google tells you to. The war between the competing needs of centralized IT and unruly users hasn’t produced a victor yet.

In any case, no matter how much bandwidth and computing power we have in the cloud, there will always be more locally. And apps will almost certainly expand to take advantage of as much bandwidth as technology can provide. So sure, we’ll all live in the cloud in the future, but I don’t think we’ll live completely in the cloud. It’s going to be a lot messier than that.