As promised, today’s catblogging is done entirely from my iPad, a task that’s fantastically more difficult than it should be thanks to the usual Apple attitude of walling off their products and insisting that everyone either do things the Apple way or no way at all. In particular, Apple has chosen not to expose any of the iPad file system in a standard way, which means that web browsers can’t upload files to a remote site the way they can on any other platform. So I had to figure out some other way to get my cat photos from the iPad to the MoJo server. It’s not impossible, but it sure is a major pain in the ass. Thanks, Apple!

(I like the iPad a lot. But this ubiquitous Apple attitude is the reason I consider it a starter tablet. More than likely, a year from now I’ll trade it in for an Android or Windows 8 tablet, which will allow me to decide for myself how I want to conduct my online life.)

Still, at least I could upload photos, even if the process was a muddle. The other problem with catblogging from the iPad has to do with Photoshop Touch. In a word, it sucks. On today’s photos, I attempted a grand total of three operations:

Every single one of these operations worked poorly. The resizing produced the pixelated whiskers that you see in both pictures. Regular Photoshop doesn’t, which means the Touch version has some kind of crappy, scaled-down resizing algorithm. Sharpening, which normally works fine, produces almost comically crude results on Touch, so I abandoned it. And lassoing an object to lighten it is tough going because fingers are crude pointing devices and Touch has a maximum zoom level of 400%, which doesn’t make small objects big enough to work on.

So maybe I should try some other photo editing tool. There’s always iPhoto, of course. Anyone have any other recommendations?

Oh yeah, and today’s theme is cats in both the foreground and the background. Not sure why. It just turned out that way. 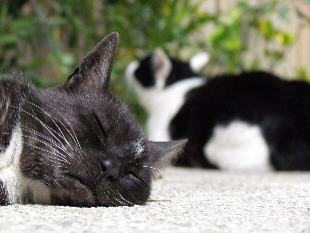 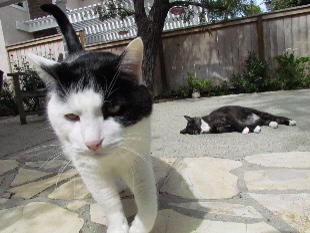