The AP embarrasses itself today trying to explain why the latest Social Security Trustees report projects that the trust fund will be exhausted sooner than we thought:

Social Security is rushing even faster toward insolvency, driven by retiring baby boomers, a weak economy and politicians’ reluctance to take painful action to fix the huge retirement and disability program.

It’s true that all of these things contribute to Social Security’s solvency problems, but only the second has anything to do with the fact that Social Security is “rushing even faster toward insolvency.” The retirement of the baby boomers and the fecklessness of Congress haven’t changed at all since last year.

However, it’s true that the Trustees now project that the trust fund will be exhausted in 2033, not 2036. There are some minor demographic and technical issues that contributed to this adjustment, but the biggest reason by far is that the 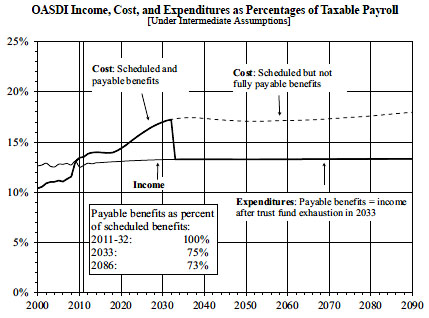 Trustees made several changes in their assumptions about the economy:

The Trustees now assume a decline in average hours worked of 0.05 percent per year, rather than no change as they assumed last year…. Starting values for 2011 resulted in higher benefit levels and lower payroll taxes for 2012 than those projected in last year’s report. Price inflation in 2011 was higher than expected [and] the average level of taxable earnings for covered workers in 2011 was about 1.6 percent lower than estimated in last year’s report….Real interest rates for new investments during 2011 are significantly lower than projected in last year’s report, and these lower real interest rates on new investments continue for several years before reaching their ultimate levels.

Roughly speaking, the economy is weak and the Trustees have updated their models to assume that the economy will remain weak for some time. That means fewer workers paying into the system; a lower level of taxable wages; and lower returns on the treasury bonds in the trust fund as the Fed continues to hold interest rates low until the economy recovers.

Moral of the story: We need to get our economy out of a ditch, and the sooner the better. But you already knew that.

On a related note, I’m going to annoy a few of my fellow lefties and say that we should stop getting bent out of shape when people respond to the Trustees report by saying that Social Security is “going bankrupt” or “running dry” or some similar formulation. There’s a hyperlegalistic sense in which this isn’t accurate, but honestly, it would be a helluva dramatic event if the trust fund ran out of money and Social Security suddenly had to slash benefits by 25% in 2033 (see chart above). Referring to this as “bankruptcy” isn’t all that big a rhetorical stretch, and everyone on both left and right should put away their fainting couches, ditch all the tired excuses, and get to work on a fix that would involve — say it in unison, folks! — a very modest and phased-in cut in benefits combined with a very modest and phased-in increase in taxes. This isn’t a hard problem.