Dave Weigel looks at the latest Pew poll asking voters which issues they care about, and concludes that Mitch Daniels was right: Republicans need to declare a truce on social issues and focus instead on the economy. 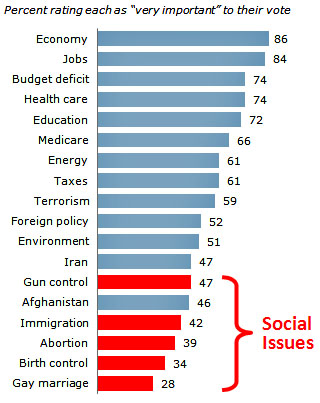 issue/abortion/contraception flare-ups — brought on, typically, by Republican legislators — are distractions. They certainly look that way. They distract from the issues he can win on.

Of course, candidates don’t always get to decide which issues the rest of the country is going to focus on. My guess is that Romney wishes all the contraception and related “mommy war” issues had never cropped up in the first place, but that wasn’t his call to make. And once the issue was in play, he had little choice but to take the kinds of positions that please the most militant members of his tea party base.

On the bright side for Romney, though, just because voters say they don’t care about social issues this year doesn’t mean they really don’t care. And not every culture war issue will necessarily end up benefiting the Democrats, as the contraception debate seems to have. They won’t seem like distractions anymore if the next eruption turns into something that actively helps the Romney campaign.