The chart on the right is based on data that may or may not be accurate and an extrapolation that’s unreliable. So the precise shape of the curve is mostly guesswork. But generally speaking, it’s 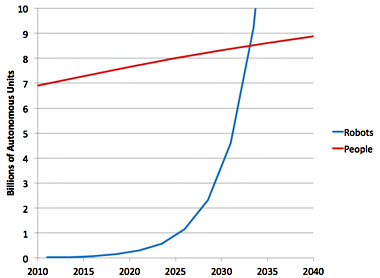 probably about right, and it shows that the global population of robots is set to skyrocket over the next few decades. Sometime in the 2030s there will be more robots than people. Stuart Staniford draws some bleak conclusions:

Read the whole thing. I pretty much agree that Stuart’s gloomy view is the most likely one in the medium term, and it’s unfortunate that, for a variety of reasons, we’re unlikely in the extreme to ever try to seriously plan for it. Those reasons include the fact that it will happen slowly; lots of people just don’t believe Stuart’s scenario in the first place; lots more don’t want to believe it for self-interested reasons; and addressing it in a serious way would require our cognitive and financial elites to give up a lot of power and wealth, which they won’t do willingly. So this will all probably unfold pretty grimly for a lot of people.