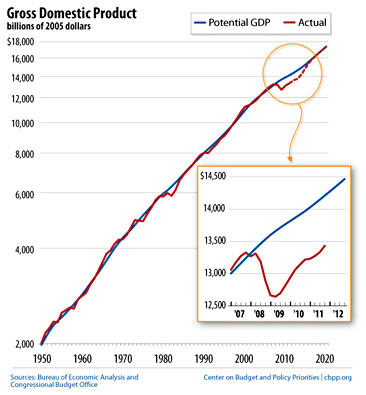 fast enough to make up the ground it lost in 2008-09. So there continues to be a big difference between actual GDP and potential GDP. This is known as the output gap.

So when will GDP start growing fast enough to close the output gap and get us back to our true potential output level? Last month, St. Louis Fed president James Bullard suggested that the answer is never. We lost a chunk of output potential when the housing bubble burst, and that’s that. Generally speaking, I think the evidence suggests Bullard is wrong. But not all the evidence points in that direction. It’s possible, for example, that potential GDP started slowing down a decade ago, but it was masked by the housing bubble. So instead of seeing a gradual slowdown over the course of several years, we saw the entire slowdown condensed into about 24 months.

There’s actually a surprising amount of evidence for this. For example: median income growth slowed in the mid-70s, but it stalled almost completely around 2000. Real-world investment opportunities began stagnating around 2000. Labor markets slackened permanently starting around 2000. The employment-population ratio among women plateaued around 2000 and continued its long-term decline among men. The labor share of income in the nonfinancial sector dropped steeply starting in 2000 and never recovered. The number of jobs created by new businesses peaked around 2000 and has been falling ever since. State and local government output suddenly stagnated around 2000. Globally, the energy intensity of GDP stopped growing around 2000, which means world economic growth became limited by energy growth.

I bring this up because both Grep Ip and Felix Salmon are starting to wonder if Bullard is right. Maybe we aren’t ever going to make up the output gap. Maybe we’ve lost a certain amount of economic output permanently. Are they just becoming overly pessimistic after four years of lousy economic growth? Maybe. But their posts are worth reading.