Paging Karl Smith! Suzy Khimm writes today about something that I remember getting a bit of attention a few years ago: namely that as we baby boomers age, we’re all going to sell our houses. This is going to put an unusually large number of old houses on the market, which could keep the construction market depressed for a long time. It’s our final parting gift to the younger generation.

But is it true? Suzy is writing about a new study from the Bipartisan Policy Center, so I went off to read it. In the executive summary, it says this:

So, um, pretty much the same. The next decade will see a release of maybe a few hundred thousand more old homes than the last decade. That’s a rounding error. Here’s the detail, which accounts for different forecasts of economic growth: 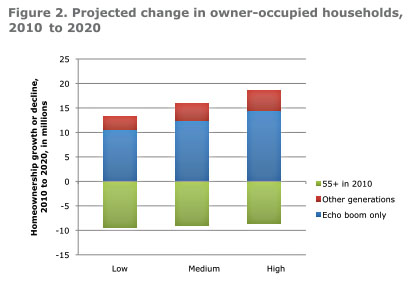 In the medium scenario, there would be an increase of about 7 million units, compared to 6 million for the past decade. That doesn’t sound especially Armageddon-like. I’m having a hard time getting too panicked about this.

UPDATE: In fairness, I should note that the study also suggests that this release of housing will be quite different in different states, so there could be substantial issues in some regions but not in others. Also, we’re going to need a lot of new retirement and assisted-living homes as the baby boom generation ages. But I think we already knew that.