So I finally got around to reading this weekend’s big Washington Post tick tock about last year’s debt ceiling negotiations. Jon Chait goaded me into it by writing a post saying that everyone was missing the real bombshell in the piece. Yes, the deal traded $800 billion in tax increases for $1.7 trillion in spending cuts. Nothing new there. Yes, the deal got derailed after the “Gang of Six” unveiled a more ambitious proposal that suggested Republicans could live with more than $800 billion in tax increases. Nothing new there either. The real news, he says, was that the $800 billion in revenues was mostly just a phantom in the first place, and Obama was willing to sell out the left by accepting this:

In Boehner’s offer Friday night, the taxes came with strings attached. The Republicans wanted Obama to give up plans to raise the tax rate paid by the wealthiest Americans, now set at 35 percent. Instead, they wanted that rate to go down….Another key caveat: Much of the $800 billion would have to come from overhauling the tax code — not from higher tax rates. The Republicans believed lower rates and a simpler code would generate new revenue by discouraging 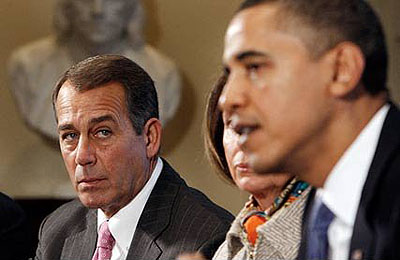 cheating and spurring economic growth. If the White House would agree to count that money, the Republican leaders said, then they might have a deal.

That last condition was a problem. For years, Democrats have mocked the Republican argument that tax cuts pay for themselves by boosting the economy….So there were issues to work out that Sunday but also reason for optimism. In its counterproposal, the White House appeared to accept the $800 billion tax offer and a lower top rate….When Boehner brought up economic growth, arguing that his caucus would not accept tax increases under any other terms, the Republicans saw Geithner as receptive, Jackson said. “It was literally one of the last things discussed when they came in on that Sunday. And Geithner said, ‘Yes, we accept that,’?” Jackson recalled. “We viewed it as a breakthrough.”

On this point, the two sides are in dispute. Geithner and other administration officials say it never happened. They strenuously deny agreeing to count revenue from economic growth, a process known as “dynamic scoring.” Treasury spokeswoman Jenni LeCompte said the Republicans “were kidding themselves” if they thought the White House would concede that point. “That’s always been a total non-starter for Secretary Geithner and this administration and always will be,” she said.

Meh. The story doesn’t say that Obama accepted the notion that the new revenue would mostly come from dynamic scoring. It says the two sides disagree about who accepted what. Big surprise. And anyway, even this isn’t new. Here’s Jay Newton-Small a few days after the deal fell apart:

Late last Sunday morning, House Speaker John Boehner and his No. 2, majority leader Eric Cantor, found themselves in White House Chief of Staff Bill Daley’s West Wing office talking with Treasury Secretary Tim Geithner about how tax reform, if done right, could produce $800 billion in new revenues over the next 10 years through growth and by closing loopholes. Sensitive to an anti-tax promise taken by most of the House Republicans, the negotiators felt this would be a way to raise revenues without breaking the pledge.

In other words, Cantor was hellbent on raising revenue without breaking the Republicans’ no-higher-taxes pledge. Instead, some of the additional revenue would come via higher growth and some would come from broadening the tax base by closing loopholes and reducing tax expenditures. Did they end up agreeing on this? Nobody knows.

To be honest, I’m not sure there’s anything new in the WaPo piece. There are a few details here and there, and a bit more recreated dialog, but nothing substantive. It’s the same story we’ve heard from the very beginning: It was a lousy deal; the revenue increases were dubious; it got derailed after the Gang of Six released its plan and Obama asked Boehner for more revenue; and it got scuttled completely when Boehner refused to accept Obama’s offer to go back to the original deal. Unless I’m missing something, we already knew all this.