The BEA announced today that GDP in the fourth quarter of 2011 went up 3.0%, not 2.8%. That’s good news, but nothing super special. It’s a pretty small correction, really.

However, the BEA also announced a correction to its estimate of income growth, and it was considerably more spectacular. Over at his official blog, Mark Doms, the chief economist at the Department of Commerce, provides his take on this:

While the upward revision to GDP was welcome news, there was even better news in revisions to the income data….Personal income growth was revised upward, from 0.8% to 3.2% in Q3, and from 2.6% and 3.2% in Q4.

As consumer spending wasn’t revised, this extra income implies that the personal saving rate was also revised upward in both quarters: 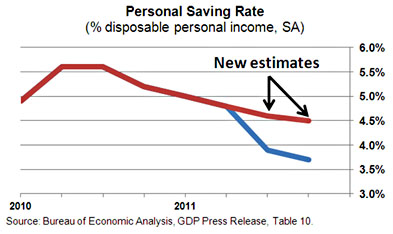 These revisions to income and savings are significant because of the story they tell about the sustainability of the recent strength of consumer spending. The old story line was that some of the growth we saw in consumer spending in the second half of last year was fueled by a decrease in the saving rate. A challenge we then faced was the sustainability of future growth (since one can only lower the saving rate for so long). Today’s data show that the saving rate didn’t fall much and that the growth was instead fueled by higher incomes. I realize this is getting into the weeds a bit, but it really is quite good and important economic news.

This is good news. If growth is being driven by consumers spending down their savings, that’s unsustainable. This is yet another sign that the economy may really be on the mend this time around.