You’ve probably all been wondering about me and my new toy. “I wonder how Kevin likes reading on an iPad?” you’ve been asking yourself. “I sure wish he’d write a blog post telling us.”

OK, fine. I will. I’m not sure if I’m surprised by this or not, but I like it a lot. I bought a Kindle a few years ago and used it for several months, and while I didn’t hate it, I never really warmed to it either. But the iPad feels entirely different. Partly it’s the larger screen. Partly it’s the faster page turning. That doesn’t sound like a lot, but it’s just enough to 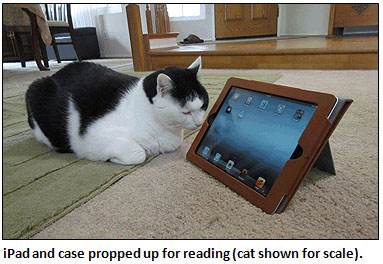 make it feel a lot more comfortable than the Kindle. Having readable graphics in nonfiction is a huge plus too. (Though I wish Amazon would make their inline graphics a little higher resolution. I know that would make file sizes bigger, but it would be worth it.)

But what about eyestrain? One of the reasons I waited so long to try a tablet was because I was afraid that long reading stints on a low-res display would make my eyes ache. I don’t know if that would have been a problem since I never tried it, but the retina display on the iPad is as good as advertised, and so far hasn’t caused any eye fatigue at all.

I’m also pleased with Readability, an Instapaper-like app that allows you to easily save long magazine articles and then read them later on the iPad. Everybody told me I’d love this, and everybody was right. I’m way more likely to read long-form stuff if I can do it in my easy chair instead of sitting in front of my desktop display. (I’m using Readability because for some reason Instapaper wouldn’t work properly for me. But it works great and the app is free, so I guess this was a blessing in disguise.)

I ended up buying a leather cover for the iPad, and although that probably marks me as terminally unhip, it’s been great. For me, reading is partially a tactile experience, and I don’t like to read on a device that’s cool and slick to the touch. The leather cover gives the iPad a warmer, friendlier quality that just feels more like a book. Besides, the leather cover also has a flip stand thingie that props up the iPad when I’m reading at a table, and that’s something I like a lot too.

It’s still possible that I’ll get bored with the iPad at some point and drift back to dead-tree books. But so far I’m a convert.

POSTSCRIPT: Is there anything I don’t like about the iPad? Well, it takes a helluva long time to charge, but that’s not too big a deal. And it’s all but impossible to move files on and off the iPad unless you have a handy copy of iTunes running on a desktop machine. That’s a pain in the ass, and especially annoying because it’s a deliberate design decision, not a sad but necessary compromise. Still, I don’t have a big need to do this, so I can live with it.