Glenn Thrush reports today that although Hispanics have been disappointed in Obama, the Republican presidential primary has sent them stampeding back into his arms: 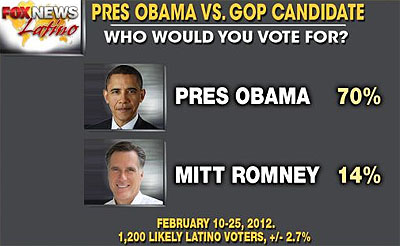 Hispanics, a powerful bloc whose vote could decide the outcome in pivotal states such as Nevada, Florida, Colorado and Arizona, seem to have responded by abandoning Romney, with only 14 percent of Hispanic voters favoring him over Obama in a recent Fox Latino poll — one-third of the Hispanic support George W. Bush enjoyed in 2004.

“In 2008, John McCain paid the price with Latinos for what other Republicans … had said and done,” said Ana Navarro, a Republican Party operative who worked for McCain in 2008 and is a longtime friend who advises Florida Gov. Jeb Bush, who remains popular with that state’s large Latino population. “Romney could very well pay an even higher price with Latinos, but it will be for things he’s said and done. The tragic part about it is that he’s done it to win over the very conservatives, and they still [aren’t supporting him].”

Yikes. But both Santorum and Gingrich poll at 14% too. In fact, in the Fox poll, Latinos actually prefer Romney over the other GOP candidates by a huge margin. The problem isn’t so much that they hate Romney, it’s that they hate pretty much everything about the Republican Party. On virtually every question they trust Democrats over Republicans by a huge margin. Nice work, tea partiers.