I’ve noted on several occasions that Fox News spent pretty much the entire summer of 2010 fanning the flames of xenophobia and racial resentment, and a few days ago I wondered if the ridiculous Derrick Bell incident foreshadowed a reprise during this year’s election summer. We’ll have to wait for summer to find out, but ThinkProgress reminds us today that there are two sides to this kind of thing: there’s the wildly overwrought coverage of stories that keep the frenzy alive, but there’s also the wildly understated coverage of stories that contradict the favored narrative of white culture under assault.

The Trayvon Martin story is just that. Adam Weinstein has a quick explainer here if you need to get up to speed on the story of a black kid in Florida who got shot by a white neighborhood watch patrolman for no apparent reason. The neighborhood watch guy was barely even questioned after the incident, which was apparently written off by the local police force as just one of those things. It’s been a big story. And how has the news channel of conservative white folks covered it? ThinkProgress has the answer below. Apparently Trayvon Martin just doesn’t fit into the Fox agenda. 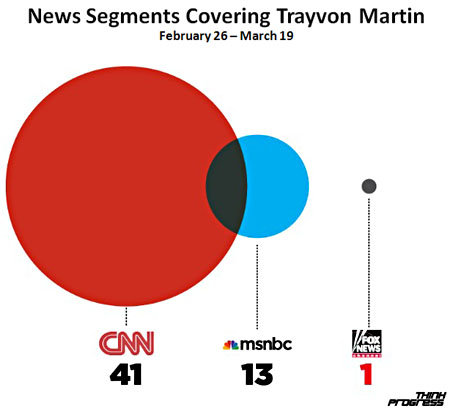