Via Sarah Kliff, a pair of researchers have taken a look at per-capita Medicare spending and concluded that it’s on a long-term downward path which is likely to continue into the future. Their argument is pretty simple: Although Medicare’s sustainable growth rate formula has been overridden year after year (this is the infamous annual “doc fix”), they say that other attempts to rein in spending have actually been pretty effective. This suggests that the cost controls in Obamacare have a pretty good chance of being effective too. Their basic chart is below, and since we’re all about the value-added around here I’ve added a colorful red arrow to indicate the trajectory.

(Note that their calculations are based on potential GDP, not actual GDP. I’m not sure why, but I assume it’s to control for the effects of recessions and boom years.)

Now, this calculation is per beneficiary, which means that overall Medicare costs will still go up if the number of beneficiaries goes up — which it will for the next few decades as the baby boomer generation ages. There’s really nothing to be done about that, though. Demographic bills just have to be paid. Nonetheless, if we can manage to keep benefits per beneficiary stable compared to GDP we’ll be in pretty good shape. 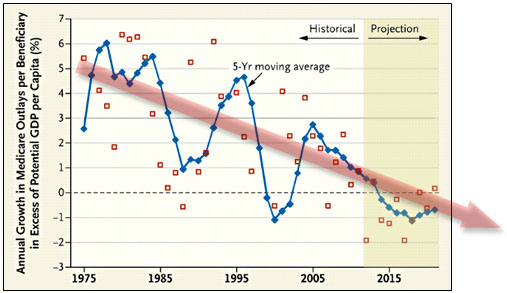