Via Suzy Khimm, here’s an interesting bit of research from Amine Ouazad and Romain Rancière. During the housing boom of the aughts, it became easier for low-income families to buy more expensive homes. Since African-American families have lower incomes than average, this suggests that the housing boom, on average, should have allowed them to move into less segregated neighborhoods.

Hispanic families have used the easier access to credit to buy houses in predominantly Hispanic neighbourhoods with the consequence of enrolling their children in schools with fewer black peers, and more Hispanic and white peers. We estimate that, because of the credit boom, black students in 2006 had 2% fewer Hispanic peers….Credit markets enabled a substantial fraction of Hispanic families to live in neighbourhoods with fewer black families, even though a substantial fraction of black families were moving to more racially integrated areas.

The chart below shows the impact of the housing boom on black household segregation. In 1997, black students in public schools had an “isolation” of 50.5%. That is, 50.5% of their peers were black. By 2007, that had dropped to 49%. But the housing boom actually slowed the rate of decline. The authors conclude that if the housing boom had never happened, black isolation would have dropped to 48%. Their conclusion: “The net effect is that credit markets increased racial segregation.” 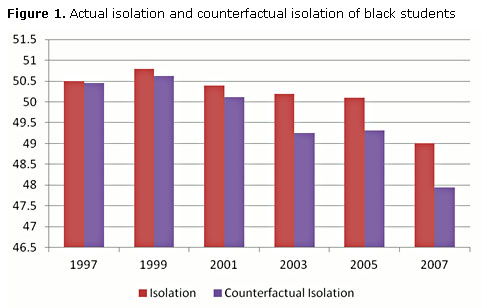