Yesterday, having watched the ludicrous Derrick Bell “scandal” evolve in the wingosphere, I took a trip down memory lane and recapped the frenzy of race-baiting that erupted from the right-wing media machine just before the 2010 elections. If recent press reports are correct, 2012 is also an election year, which suggested to 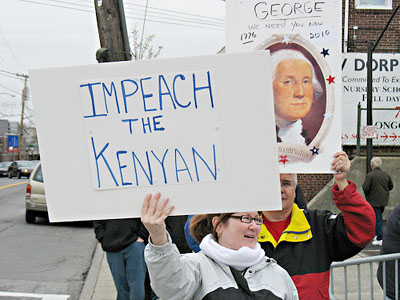 me that we just might be in for a repeat performance this summer.

That, however, is pedestrian thinking. Ed Kilgore — who hails from the South; has been involved in politics longer than me; and has a more active imagination than I do — sees a double bank shot at work:

What strikes me about the Bell “scandal,” however, is how relatively little it seems to have to do with Barack Obama. The “story” has very quickly moved on from Obama’s anodyne introduction of Bell at a 1991 Harvard protest, to Bell’s supposed “racialism,” and to the “racialism” supposedly suffusing academia and for that matter, educational affirmative action in general.

….It almost seems like what our wingnut friends most want is to poke the stick at racial issues so that can scream about the horrible indignity of being accused of racism, as though they are seeking insulation against future charges of race-baiting. My concern is that’s a sign something a lot worse than video of Barack Obama with Derrick Bell could be on the way.

I like the way you think, Brother Ed! Conservatives have long demonstrated a remarkable amount of out-of-the-box creativity when it comes to attack politics, and it’s something we could stand to learn from.

I’m not sure I actually believe this one, though. The Bell affair just has too many signs of being a huge cockup, not some cleverly nefarious plot to get a rise out of lefties. The wingers saw Barack Obama + radical critical race guy and they were off to the races.

But is there worse to come? Probably. So I guess Ed and I end up in the same place regardless of how we got there.