Charles Murray is concerned about the moral collapse of the white working class and ascribes it to the breakdown of traditional values that began in the 60s. But Paul Krugman hauls out a couple of charts showing that violent crime and teen pregnancy have been dropping over the past few decades and makes a pointed observation: “So here’s a thought: maybe traditional social values are eroding in the white working class — but maybe those traditional social values aren’t as essential to a good society as conservatives like to imagine.”

Maybe! But then again, maybe both Murray and Krugman are missing the boat. I’ve written before about Rick Nevin’s research showing the startlingly strong correlation between the drop in childhood lead exposure (mostly thanks to the introduction of unleaded gasoline) and the drop in violent crime, but I’ve never mentioned the actual title of the original paper he wrote. Here it is:

Guess what? The reduction in blood lead levels over the past few decades seems to be a very strong predictor of the drop in teen pregnancy levels. Here’s Nevin:

Although other social trends and government policies are often cited to explain the rise and fall in unwed pregnancy and crime rates over recent decades, the role of childhood lead exposure seems to be especially apparent in the best-fit lag structures for gasoline lead regressions. In the case of the unwed pregnancy regressions, the best-fit lag for each bracket is consistent with changes in lead exposure in the first years of life….The fit between the temporal patterns, with lags consistent with the known risks of lead exposure in the first years of life, provide striking visual support for the association between lead exposure and undesirable social behaviors.

His “striking visual support” is below. Make of this what you will. Just keep in mind that sometimes neither “traditional moral values” nor economic stagnation provides all the answers. Sometimes you ought to be looking elsewhere. 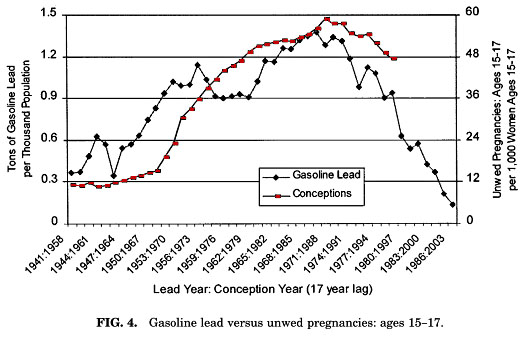