So here’s a dilemma: yesterday I suggested that Rick Santorum’s candidacy was useful for the spotlight it shined on the movement conservative id, something that America might do well to confront 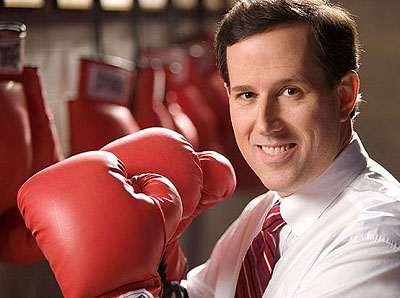 directly. So does this mean I should highlight (as a public service, of course) every outlandish paranoid theory that issues forth from Santorum? That would keep me pretty busy, and I really don’t think I can commit to it on a long-term basis. But here’s the latest:

On the president’s efforts to boost college attendance, Santorum said, “I understand why Barack Obama wants to send every kid to college, because of their indoctrination mills, absolutely … The indoctrination that is going on at the university level is a harm to our country.”

He claimed that “62 percent of kids who go into college with a faith commitment leave without it,” but declined to cite a source for the figure. And he floated the idea of requiring that universities that receive public funds have “intellectual diversity” on campus.

Now, this is a new one to me. It’s commonplace for movement conservatives to believe that universities are dens of depravity and radical left indoctrination. So far, so normal. But as far as I know, most of them don’t believe that efforts to get more kids into college are motivated by a desire to destroy their faith. That’s a step beyond even normal wingnut land.

This stuff leaves me kind of speechless. I already know what hardcore conservatives think of academia and university life in general. Nothing new there. And let’s face it: the political mood at most universities is pretty liberal. So fine. But what kind of person actively believes that the president of the United States favors more access to higher education as a plot to secularize the country? This is 10-page-single-spaced-crank-letter-to-the-editor territory. I wonder if even one single real conservative (not the apostates or the RINOs — and you know who you are) will step up and suggest that this is just a wee bit crackpottish?