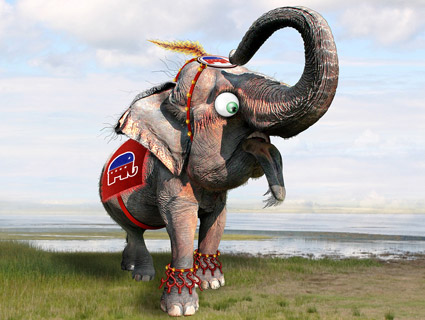 Ten years ago John Judis and Ruy Teixeira wrote The Emerging Democratic Majority, which argued that a variety of demographic trends spelled doom for the Republican Party. Unfortunately for Judis and Teixeira, Republicans ignored their demographic doom and won a convincing victory in 2004. But hey, that was due to 9/11 and Iraq and the war on terror, and who could have predicted that? Then Democrats chalked up big wins in 2006 and 2008 (whew!), but in 2010 Republicans came roaring back. But hey, that was because of an epic recession, and who could have predicted that? Any day now, those demographics are going to kick in and Republicans will be doomed once and for all. Honest.

I am, obviously, being a smart-ass about this. In fact, as Jon Chait writes today in “2012 or Never,” the demographic trends that Judis and Teixeira wrote about really are continuing apace. Smart Republicans are well aware of this, and they’re especially well aware that one of the biggest demographic trends working against them is the growth of the Latino population. So a few years ago, as a way of peeling off some Latino votes from the Democrats, they took a stab at passing a moderate immigration bill. Unfortunately, their base went into a full-bore revolt and began demanding a harsher anti-immigrant policy instead of a more moderate one. As Jon says, this was about like publicly announcing an electoral suicide pact on national TV.

And it gets worse. At the same time that Republicans are deliberately adopting policies that spell long-term disaster, they’ve also adopted an uncompromising all-or-nothing political strategy that appeals to their existing base but has cost them dearly in the form of short-term Democratic victories. A more moderate party could have stopped or watered down health care reform, but instead they got Obamacare. A more moderate party could have struck a historic spending deal with Obama, but instead they got nothing. And like lemmings going over a cliff, virtually all of them voted for Paul Ryan’s budget roadmap, which was extremely unpopular with most voters. What’s going on?

The way to make sense of that foolhardiness is that the party has decided to bet everything on its one “last chance.”…Grim though the long-term demography may be, it became apparent to Republicans almost immediately after Obama took office that political fate had handed them an impossibly lucky opportunity. Democrats had come to power almost concurrently with the deepest economic crisis in 80 years, and Republicans quickly seized the tactical advantage, in an effort to leverage the crisis to rewrite their own political fortunes.

…During the last midterm elections, the strategy succeeded brilliantly…In the long run, though, the GOP has done nothing at all to rehabilitate its deep unpopularity with the public as a whole, and has only further poisoned its standing with Hispanics. But by forswearing compromise, it opened the door to a single shot. The Republicans have gained the House and stand poised to win control of the Senate. If they can claw out a presidential win and hold on to Congress, they will have a glorious two-year window to restore the America they knew and loved, to lock in transformational change, or at least to wrench the status quo so far rightward that it will take Democrats a generation to wrench it back. The cost of any foregone legislative compromises on health care or the deficit would be trivial compared to the enormous gains available to a party in control of all three federal branches.

Jon doesn’t actually offer any evidence that this is what’s motivating Republicans, and likewise, I can’t really marshal much evidence that he’s wrong. But I have a hard time buying this. If I’m reading him correctly, he’s saying that Republicans know they’re doomed, and they’re deliberately adopting a catastrophic long-term strategy in the hopes that one last hurrah will be enough to keep America conservative even if they do lose every election for the next 20 years.

But this simply doesn’t pass the human-nature test. I can’t peer into the souls of Republicans, but I don’t get any sense that they believe themselves to be doomed. People just don’t think that way. Rather, I get the sense that they’re true believers who think that, deep in its heart, America agrees with them.

This also doesn’t pass the common sense test. Even if Republicans do win control of all three branches, they aren’t going to win 60 seats in the Senate. They aren’t even going to come close. So if they try to roll back the New Deal, or whatever their plan is, Democrats will filibuster it. Republicans have already shown them how, after all. The GOP will certainly be able to move the dial a bit if they win in November, but there’s no way anyone in the party thinks they can “lock in transformational change” over a two-year period with 52 votes in the Senate.

Basically, I just don’t think there’s a huge mystery to be solved here. When Democrats lost to Reagan, they nominated first Walter Mondale and then Michael Dukakis before finally tacking to the center and putting Bill Clinton in the White House. That was a 12-year stretch. Britain’s Labour Party spent a decade moving left before they finally tacked back to the center after losing to Margaret Thatcher. It took them 18 years to finally regain power. Republicans have only been in the wilderness for either four or six years, depending on how you count. If it takes until 2016 for them to come to their senses, that would be a pretty normal progression.

Republicans don’t think they have one last chance before the fat lady sings them off the stage. They’re just reacting emotionally to a big defeat by convincing themselves that they were rejected because they hadn’t been true enough to their principles. That happens all the time. They’ll come around eventually.