St. Louis Fed president James Bullard, who’s been sort of hawkish and then sort of centrist, now seems to moving back toward hawkishness again. “Hawkish,” of course, normally refers to the Fed’s attitude toward inflation, but at this point it seems to have morphed 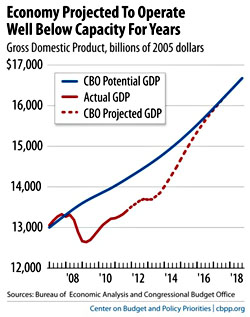 into “the economy sucks and we’d all better just get used to it”:

If the Federal Reserve doesn’t change the way it takes stock of the economy and its relationship to monetary policy, the U.S. may be facing a “looming disaster,” a top central bank official said Monday.

At issue is the commonly held view that the Fed must use its policy tools to help the economy regain the ground it lost over the financial crisis and ensuing recession, in turn closing what economists see as the gap between the economy’s potential and its actual rates of growth, Federal Reserve Bank of St. Louis President James Bullard said. But the nature of the shock suffered over recent years is such that if this model continues to drive policy, “it may be very difficult for the U.S. to ever move off of the zero lower bound on nominal interest rates,” Bullard said.

….Bullard said he worries that current preoccupation with closing the output gap “may be keeping us all prisoner” because it puts monetary policy makers in the impossible position of trying to get growth to converge back to pre-crisis levels, which were themselves a reflection of the housing market bubble.

So there you have it. We managed to make up the output gap after the Great Depression, but it’s not going to happen this time because — well, just because. Bullard’s view seems to be that we’re stuck because the 2008 crash was caused by an asset bubble, but the world has seen lots of asset bubbles before. It’s not clear why he thinks this one is so special that we’re never going to make up the ground we lost when it burst.

So suck it up, America. And keep in mind that as these things go, Bullard is actually something of a moderate. As near as I can tell, about half of the FOMC thinks Bullard is just pandering to the hippies and we should end this nonsense of keeping interest rates low right now. Sure, it’ll be a little painful, but eventually all you malingerers out there will get the message.