A few weeks ago, after Michele Bachmann, Rick Perry, and Herman Cain had successively peaked and then plummeted in the Republican primary race, the conventional wisdom was simple: Newt Gingrich was the last man standing. Whether by luck or by native shrewdness, he had peaked late enough in the game that there wasn’t time for Republican voters to get tired of him before the Iowa caucuses.

Hah! Turns out that three weeks plus a gazillion dollars of brutal negative advertising was plenty of time. Gingrich began his fall to earth almost immediately, as the RCP poll-of-polls below shows. Because RCP is a poll average, it actually understates Gingrich’s collapse, which has him barely breaking double digits in the latest Iowa polls. Instead, we’re now seeing mini-boomlets for Ron Paul and Rick Santorum.

This is all amazing enough on its face, but if you ask me, it’s even more amazing than that. It’s not just that Republican voters can’t make up their minds. And it’s not just that they’re really, really resisting their eventual doom of pretending to be enthusiastic about a Mitt Romney candidacy. What’s really amazing is how fast every single candidate has fallen to earth after their initial surge. It turns out that even the Republican base got disillusioned with them after only a brief moment in the spotlight. The Republican base! These are people who believe the earth is cooling and Barack Obama was probably born in Kenya, and even they only needed a few weeks to realize that Bachmann, Perry, Cain, and Gingrich were nutcakes who probably shouldn’t be allowed to take a White House tour, let alone occupy the Oval Office for four years.

Alternatively, of course, you might think just the opposite: what really happened was that the Republican base needed only a few weeks to decide that these folks weren’t quite batshit crazy enough for their taste. Maybe so. But that’s such a glass-half-empty point of view, isn’t it? 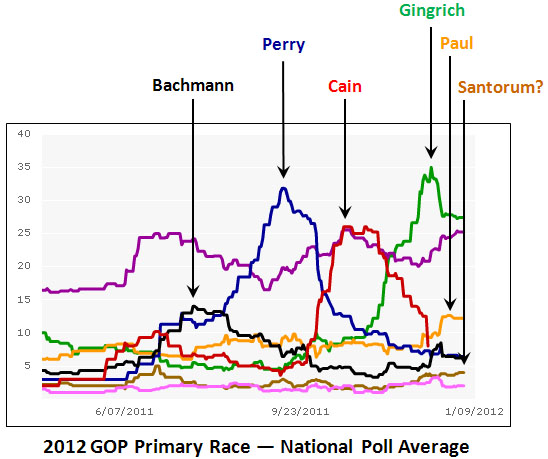