Yuval Levin over at The Corner;

I know we’re all supposed to think that the primaries are poised to turn out a weak Republican nominee and that President Obama will swoop in this fall and carry the day with some brilliant pincer move that simultaneously dubs the Republican too extreme, too moderate, too boring, and too weird…

I’m not picking on Levin here, but every once in a while I read something like this and I wonder who they’re talking about. Is there anyone on Planet Earth who thinks that Obama is just going to waltz to victory in November? Who exactly are these pundits who have apparently been banging the drum about Obama’s November cakewalk? Nobody I read, that’s for sure. As near as I can tell, it’s nearly unanimous conventional wisdom that this is going to be a very close race despite the fact that the 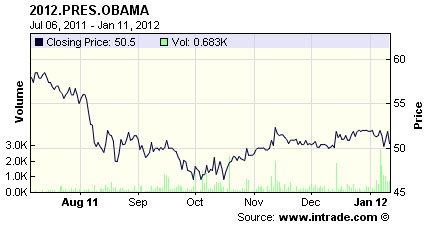 Republican field is weak. Hell, Intrade has only intermittently put Obama’s chances over 60 percent for the past year, and he’s barely been better than an even bet for the past six months.

At the same time, I also happen to think that Levin is being a wee bit too pessimistic when he hauls out a few bits of polling and economic data that, he says, “suggests there is no self-evident path to re-election for the president.” I think Obama’s record is a little more popular than he thinks, that Republican obstructionism is a fatter target than he admits, and that Mitt Romney has some glaring weaknesses that Team Obama is going to rip into mercilessly. So Obama is hardly a dead duck. But he’s not a shoo-in either, and I really don’t think anyone over the past year or so has ever suggested he is.