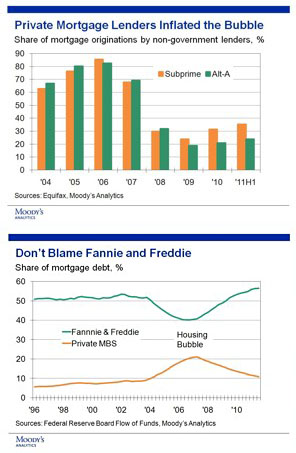 I am betting that maybe five people in the US actually believe Fannie and Freddie caused the housing bubble. Maybe half a dozen more are actively lying about it.

The rest are just Bullshitting. That is, they don’t really care what the truth is one way or the other. This is just a way to gesture in the general direction of the federal government and say Urrhh!!!

Ah, but what’s the proper response to bullshit? Karl is almost certainly right that among actual conservative economists, only a few actually believe that Fannie and Freddie played a big role in the financial collapse. But those few true believers have a significant effect on:

Does Mark Zandi know this? Of course he does. He’s not an idiot. But what’s the proper response? If you ignore the bullshitters, then the anti-GSE narrative gets set in stone whether or not it’s bullshit. If you fight it, at least it remains fluid for a while — possibly long enough for things to settle down.

So sure, it’s kabuki. All of us who write about politics for a living understand that 90% (at least) of what we do is just shadow boxing. Controversies are invented, then debunked, then invented all over again, and debunked. Sometimes the inventors know perfectly well what they’re doing, while other times they’ve talked themselves into actually believing their own nonsense. In either case, these things are mostly just proxies for the issues that really matter.