Most news articles about a company or a person include a rote disclaimer somewhere in the text: “_____ declined to comment on the matter.” This is often a pro forma statement, since the writer knew perfectly well 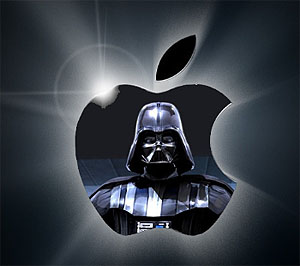 she was never going to get a comment in the first place.

Ed Bott is tired of the game. After reading Apple’s end-user license for its eBook authoring program with mounting outrage, and then writing a blistering column about it, he ended with this:

Oh, and let’s just stipulate that I could send an e-mail to Apple asking for comment, or I could hand-write my request on a sheet of paper and then put it in a shredder. Both actions would produce the same response from Cupertino. But if anyone from Apple would care to comment, you know where to find me.

Atta boy! I view Apple as much like China: overseers of a huge market that’s irresistible, and well aware that they can use their market power in any way they like without having to answer to anyone. In most ways that I can think of, they’re really far more of an evil empire than Microsoft ever was. They’re just not as big.

(On the merits of this particular case, though, I suspect that Bott is overreacting. The core problem is that Apple insists that if you write a book using its program, you can sell it only through Apple. But I’d be surprised if someone didn’t very quickly create a translator that converts Apple’s almost-ePub files into genuine, clean ePub files that can be used anywhere. In practical terms, Apple’s EULA may not really amount to much.)