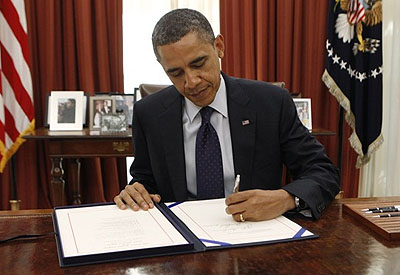 Peter Nicholas of the LA Times writes that President Obama won the payroll tax battle because he followed a shiny new strategy for dealing with Congress:

President Obama’s success in getting congressional Republicans to renew a payroll tax cut flowed from a strategy the White House has employed since the summer: Bypass Congress and marshal the political power of middle-class voters fed up with Washington gridlock.

….The revised approach is rooted in lessons learned from a debacle over the summer. Obama spent weeks holed up in meetings with congressional leaders, trying to resolve a stalemate over raising the debt ceiling. In the end, Congress complied, but at a severe cost to the nation’s credit rating and Obama’s public standing. Obama could not persuade Republicans to ease deficits through a mix of tax hikes and spending cuts and was perceived as having surrendered to their demands.

….”If the short-term tactical approach was to distance himself from Congress and put him on the side of jobs for the middle class, you’d have to say that that tactical effort has stopped the bleeding and probably shored him up with his base, which was ready to jump ship after the debt ceiling fiasco,” said William Galston, a senior fellow at the Brookings Institution.

I hope no one in the White House really believes this. Obama’s new strategy might have had a modest effect, but the real reason he won this battle is pretty simple: his bargaining position was way better. During the budget showdown and the debt ceiling showdown, Republicans had the upper hand because (a) deficit reduction was popular with the public and (b) they could credibly threaten to shut down the government. During this showdown, they had a weak position because (a) lower taxes are popular with the public and (b) their only credible threat was to refuse to pass the payroll tax extension, something that wouldn’t really cause the president much harm. It’s pretty easy to hold out against that.

Forget “strategy.” This showdown turned out differently because the fundamentals of the situation were different. This time, Obama held all the cards. Just about any strategy at all would have produced a better result than this year’s other showdowns.