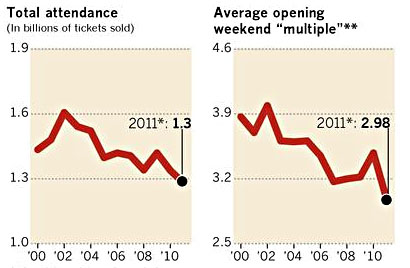 The LA Times treats us today to the charts on the right, which show the declining fortunes of the movie industry. The first chart is self-explanatory: total attendance has been on a steady downward trajectory since 2002. The second chart shows the parallel decline of “multiple,” which is a film’s total gross compared to its opening weekend gross. In 2002, the average film ultimately grossed four times its opening weekend. By 2011 that had dropped to about three times. Here’s the explanation:

Average opening weekend ticket sales have stayed fairly constant over the last decade, when adjusted for inflation. Avid moviegoers excited to see a new picture as soon as possible (think “Twihards” or “Harry Potter” fanatics) still flock to theaters as eagerly as ever in the first few days of release.

It’s the more casual audiences, the type of people who read reviews and wait to hear what their friends say, that are becoming increasingly difficult to lure to the multiplex.

“The primary culprit for declining box office is that people who are unsure at first if they want to see a movie are now more likely to wait to see it on DVD or video on demand,” said Vincent Bruzzeze, motion picture group president for research firm Ipsos MediaCT. “There’s no reason to believe that the problem is movie quality or distraction from other activities like video games.”

Hmmm. Teenagers who are eager for something to do on Friday night and don’t really care much about subtleties like theme and character development, have continued to see as many movies as they ever have. Conversely, people who “read reviews and wait to hear what their friends say” are staying away in droves. So how does this point away from declining movie quality as a problem? It sounds to me like that’s exactly what the problem is. If you devote yourself almost completely to shallow dreck and high-octane stunts, then teenagers with unformed tastes and a desperate need to get out of the house will still flock to the theaters. But the rest of us, the ones who wait a few days to see if a movie actually has anything going for it beyond being filmed at the world’s highest building, are less and less likely to bother.

In other words, Hollywood is making pictures that callow teens like but mature adults increasingly don’t. That’s about as good a definition of declining quality as you could ask for, no?