I have pretty much managed to blog this entire week without mentioning Iowa. True, there was that one joking reference to orcs yesterday. And that RomneyBot post on Wednesday. Still, not bad! Especially considering the dearth of news on any other subject, which forced me instead to write about pickles and the ellipsis. I even gave up (mostly) on baiting the PaulBots, 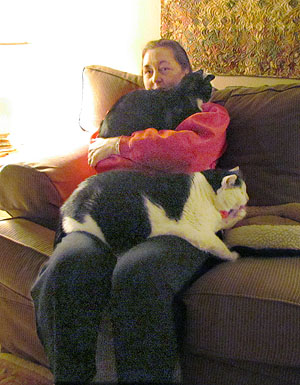 who just don’t seem to have the same ALL CAPS magic that they used to, possibly because their hero is now so obviously lying about his past that even they’re embarrassed for him. Plus he’s still a lunatic crank.

So how about we call it a year before I’m tempted to ruin my record and actually say something substantive about Iowa, which, if we’re being honest, we all know we don’t really care about? Consider it done. But first, some year-end thanks. First, to my copy editor, SS, who keeps my subjects and predicates matched and my hyphens on the straight and narrow. Second, to my editor, MB, who I fear because she badgers me into writing pieces for the magazine but who I love because she badgers me into writing pieces for the magazine. Third, to my regular correspondents, who actually make it worth my while to read my email in the morning. You know who you are. Finally, and preeminently, to Marian, who keeps me ticking away, and to Inkblot and Domino, who we all know are the real stars of this blog. You can see them all on the right in this year-ending commemorative photo, with Marian, as usual, buried under a pile o’ cats.