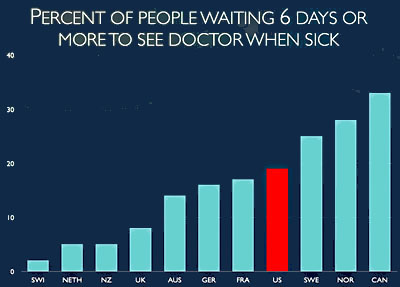 Aaron Carroll thinks that retail health clinics fill a useful niche. “There are times when you need to see a health care professional early in the morning, or later at night,” he says. “Have you tried to get an appointment lately when you’re sick? It’s hard!” The chart on the right, which has made an appearance before on this blog, tells the story. Upwards of 20% of people who are sick have to wait a week to get an appointment to see a doctor. Matt Yglesias comments:

A lot of health care professionals in the United States seem to me to be slightly in denial about the level of service they’re providing. Somehow we have the most expensive health care system in the world, with the highest paid doctors, and yet it’s strangely difficult to actually get an appointment to see one.

My guess is that they’re not in denial at all. The reason it takes a long time to see a doctor is because they’re booked solid with appointments. They see 20 or 30 patients a day, every day, so most of them really have no particular incentive to make it any easier to make an appointment. Why would they when they’re already working at capacity?

And why are they working at capacity? Part of the reason is that we just don’t have all that many doctors in America:

These two charts are surprisingly uncorrelated, which presumably has something to do with how healthcare is run in various countries and something to do with cultural mores about how often we like to see doctors. Still, the overall picture is clear: we have relatively few doctors, they’re all really busy, and they get paid a lot more than in other countries. That may not be so hot from a patient’s point of view, but from a doctor’s standpoint, what’s not to like?