The Wall Street Journal has a piece up this weekend about the difficulty that many companies are having hiring skilled workers in certain areas. I don’t doubt that this is true. For a variety of reasons, I imagine that the number of 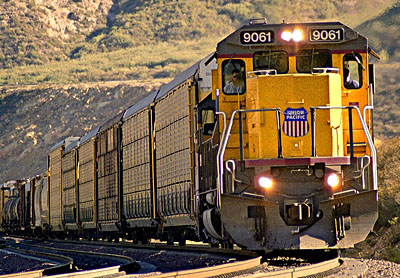 people willing to invest the time it takes to learn these kinds of jobs has declined in recent years. But there’s more to this story than meets the eye. Here’s a description of some skilled job openings at Union Pacific railroad:

When the railroad had openings for diesel electricians earlier this year, it took [Ferrie] Bailey 10 hiring sessions to fill 24 jobs….Known as “installation technicians,” the workers are responsible for putting in and maintaining a sprawling network of cable, microwave relays and related equipment that enables the railroad to monitor 850 trains running daily along its 32,000 miles of track.

This doesn’t require a bachelor’s degree but demands technical skills gained either through an associates’ degree or four years of experience in electronics. And it is grueling work. Technicians have to climb 50-foot communications towers, clamber up utility poles and work outdoors through Wyoming winters and Kansas summers. They put in 10-hour days, in clusters of eight or ten days, and are routinely away from home more than half of each month.

….Standing at the front of the room, Ms. Bailey described the deal. As installation technicians, they would earn $21.64 an hour, or close to $48,000 a year for the railroad’s regular work schedule.

After a website job posting, Ms. Bailey initially drew 58 applicants. Of them, she deemed about two dozen sufficiently qualified so that she invited them to take a $25 aptitude test, at their own expense.

Let me get this straight. Union Pacific is supposedly desperate for candidates and can barely fill all their open positions. And yet, when they identify 24 qualified applicants, they aren’t even willing to maximize their hiring pool by ponying up $600 to make sure they all take the aptitude test. Then, later in the story, there’s this:

Ms. Bailey faced more stiff competition at a job fair the next day, because then she was up against several other employers looking for the same sort skilled people as she was. “Make $70,000 – $80,000 the first year with FULL BENEFITS,” read a sign at a booth right across from Ms. Bailey’s at the job fair, put on by the U.S. Army in Fort Carson, Colo., largely to help departing soldiers ease back to civilian life.

So here’s the story. Union Pacific is offering $48,000 per year for skilled, highly specialized, journeyman work that’s physically grueling and requires workers to be away from home about half of each month. The competition is offering 50% more, but not only is UP not willing to increase their starting wage, they’re so certain they can fill all their positions that they make qualified candidates pay for their own aptitude test. And despite all this, they filled all 24 of their positions in ten hiring sessions.

It doesn’t sound to me like there’s a huge shortage of qualified workers here. It sounds to me like Union Pacific is whining about the fact that it took them all of ten hiring sessions to fill their quota even though this is a really tough job and they aren’t paying market rates for workers. It’s as if they think that actually having to make a modest effort to attract job candidates is an inversion of the natural order or something. Speaking for myself, I think I’ll hold off on breaking out the violins.