A few months ago, Matt Taibbi suggested that gaffes from conservative candidates didn’t hurt them. “When you laugh at Michele Bachmann for going on MSNBC and blurting out that the moon is made of red communist cheese,” he wrote, “these people don’t learn that she is wrong. What they learn is that you’re a dick, that they hate you more than ever, and that they’re even more determined now to support anyone who promises not to laugh at their own visions and fantasies.”

That’s clearly not true, is it? Bachmann, Cain, and Perry have engendered the exact same reaction to their screw-ups. There’s a wave of media-bashing from the base, collect-a-quotes from Tea Party leaders who say the media is unfair. And then the lights go elsewhere, and there’s a slow, quiet, walk-away from the damaged candidates. In today’s NH Journal poll of the Granite State, all three of the candidates I mentioned are deep, deep underwater on favorability. It’s almost like Republican voters still pay attention to the media.

Hold on a minute, pardner. Let’s roll the tape on this:

I don’t doubt for a second that erratic debate performances and public gaffes have played a role in damaging all three candidates. But that’s mainly because conservative voters already had something substantive to hang their concerns on. Bachmann fell because Perry entered the race; Perry fell because conservatives didn’t like his Gardasil and immigration policies; and Cain fell because of sexual harassment charges. That’s the main thing that damaged them. Acting like idiots was just the cherry on top. 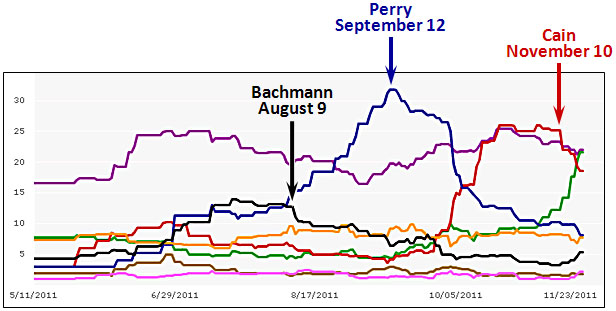