So what is Italy’s problem, anyway? Daniel Gros looks at the numbers and says their capital investment is fine, their structural indicators are fine, and investment in R&D is fine. In other words, all the usual measures that economists think are important seem fine. By process of elimination, then, their problem must be lousy governance:

There is only one set of indicators on which the performance of Italy has clearly [declined]: the governance of the country. This can be measured by the Worldwide Governance Indicators (WGI) from the World Bank. The three most important indicators for the economy are:

the rule of law;
government effectiveness in general; and
control of corruption.

Italy’s performance on all three indicators has deteriorated dramatically over the last decade. Moreover, by all these measures Italy now ranks lower than any other Eurozone country (including Greece!). The difference between Italy 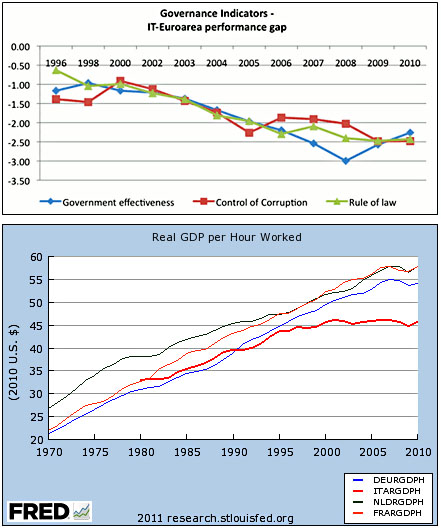 and the Eurozone core is now over two standard deviations below the core Eurozone average.

I don’t know if I buy this or not. Is governance really the only metric on which Italy has declined? Their demographics are pretty bad, after all. And they’ve been famous for dysfunctional government pretty much forever.

But demographics don’t explain a flattening in GDP per hour worked. Not obviously, anyway. And on that measure, it looks as if Italy (the thick red line on the bottom chart) started pulling away from other nearby countries right around 1996, exactly the same time that all their governance metrics started going to hell too. So maybe that really is what’s going on. Technocracy may not be getting much good press these days, but maybe a strong dose of technocracy is just what Italy needs for a while.

Then again, it might be just the opposite. In the 1990s, Italian voters rebelled against the influence of the Mafia in government, but guess what? It’s possible that things ran better when the Mafia was in charge. After all, it’s at least plausible that small-scale Mafia thuggery is less malignant than the industrial-scale business thuggery of a guy like Silvio Berlusconi. Something to think about.