Here is Herman Cain a few minutes ago, responding to Sharon Bialek’s accusation that he once demanded sex from her in return for help getting a job:

I saw Ms Allred and her client yesterday in that news conference for the very first time. As I sat in my hotel room with a couple of my staff members, as they got to the microphone, my first response in my mind and 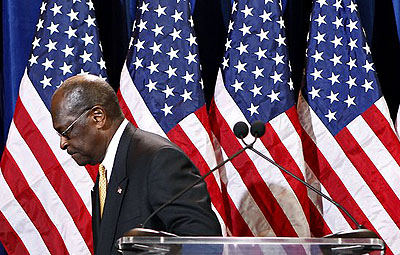 reaction was, I don’t even know who this woman is.

Roger that. But here is WIND radio host Amy Jacobson describing a backstage encounter between Cain and Bialek five weeks ago at a tea party convention:

Jacobson described their encounter as ‘intense’, that you could ‘cut it with a knife’, saying that she knew not to interrupt them. Jacobson had wanted to get a photo with Cain and said she was bum-rushed by Bialek who beat her to Cain and then had his ear for 2-3 minutes. She said it was clear Bialek had something she wanted to tell Cain and “by God she was going to tell him what she came there to tell him”….She affirmed she had no idea what they were actually talking about, only that Cain was saying “uh huh” several times throughout their brief encounter.

If Cain wants to claim that nothing ever happened and his accusers are all pathological liars, that’s fine. I have a feeling he’s not going to win that fight, but whatever. But to claim that he had no idea who Bialek was when she bent his ear for several minutes just a few weeks ago in front of witnesses? That’s not going to fly.

On the bright side, denying allegations of sexual harrassment might actually be Cain’s strong suit. Here he is talking substance in an interview with ABC’s Jonathan Karl:

That’s so incoherent that it justifies the line: not even wrong. Cain then refuses to answer any further on the grounds that it’s a hypothetical question. Duh.

That’s from the Guardian’s Richard Adams, whose dry British sensibility seems just about perfect for this kind of story.