Conservative apostate David Frum describes the parallel universe in which he thinks his fellow conservatives live these days:

When I entered Republican politics, during an earlier period of malaise, in the late seventies and early eighties, the movement got most of the big questions—crime, inflation, the 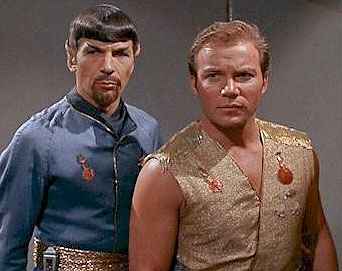 Cold War—right. This time, the party is getting the big questions disastrously wrong.

….The thought leaders on talk radio and Fox do more than shape opinion. Backed by their own wing of the book-publishing industry and supported by think tanks that increasingly function as public-relations agencies, conservatives have built a whole alternative knowledge system, with its own facts, its own history, its own laws of economics. Outside this alternative reality, the United States is a country dominated by a strong Christian religiosity. Within it, Christians are a persecuted minority. Outside the system, President Obama—whatever his policy errors—is a figure of imposing intellect and dignity. Within the system, he’s a pitiful nothing, unable to speak without a teleprompter, an affirmative-action phony doomed to inevitable defeat. Outside the system, social scientists worry that the U.S. is hardening into one of the most rigid class societies in the Western world, in which the children of the poor have less chance of escape than in France, Germany, or even England. Inside the system, the U.S. remains (to borrow the words of Senator Marco Rubio) “the only place in the world where it doesn’t matter who your parents were or where you came from.”

Actually, I can understand the first item. America may be just about the most Christian advanced nation on earth, but there’s no question that Christians have suffered some setbacks. There are more nonbelievers today than any time in recent memory. Prayer in public school has long since been banned. Religious symbolism has mostly been removed from public functions. Liberals make fun of evangelical megachurches. So yeah: a feeling of besiegement is at least understandable.

And I understand the third item too. Hell, just about every country believes the same thing, and ruling elites for the past two centuries have all found it necessary to pretend that they’re jes folks. So there’s nothing mysterious about this either.

But the second item is a head scratcher. Whatever else you think of him, Obama is pretty obviously smart, savvy, and eloquent. What’s more, when they’re not yakking about what a callow bungler he is, conservatives spend their time insisting that he’s led a shadowy socialist revolution that’s practically brought America to its knees. So which is it? Is he a phenomenally successful fifth columnist or an incompetent cretin? Can he really be both?

In any case, the success of modern Republicanism isn’t all that hard to understand anyway. Rich people like it for obvious reasons. Social conservatives like it for obvious reasons. And the white working class — well, they might not actually like it all that much, but they mostly dislike liberals even more. And this is no surprise. After all, we spend an awful lot of time trying to make them feel guilty. Your hunting trips? It’s a slaughter of innocent animals. Your 15 mpg pickup truck? It’s wrecking the planet. Your sexist jokes? It’s workplace harassment. Your air conditioner? Keep it above 80, pal. That lazy family in the Section 8 housing down the street? Show a little compassion for the less fortunate, will you?

There’s good reason for all this stuff, but it’s also understandably irritating. Is it really any wonder that plenty of people are turned off by it? And if there’s a large bloc of irritated registered voters, is it surprising that some political party somewhere is going to take advantage of this irritation by assuring them that heartland values are the real America, racism is a liberal scam, global warming is a myth, and social welfare programs do more harm than good?